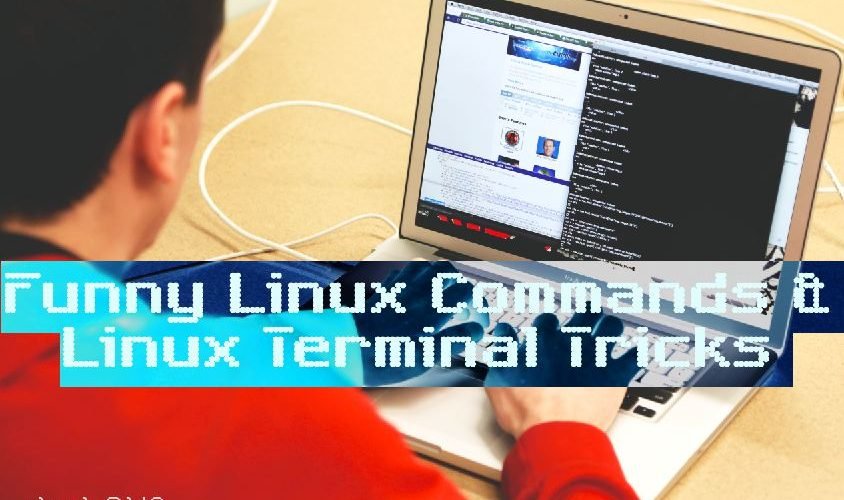 linux commands cheat sheet and Tricks to have fun with command line, these funny Linux Commands are pointless but awesome. Linux is fun, you will definitely love these, i can also say these as Linux Easter Eggs. So, let’s dive in, and have fun.

The rig is Funny Linux command stands for  Random Identity Generator, it generates the random fake ids, that includes the names, address, city, state, Zip code etc. If this doesn’t work for the first time, then you have to install the package by ” apt-get install rig” and wait for some moments, then you are good to go.

This Linux terminal command is a kind of tool based on asciiart animation that renders a burning fire animation in the terminal. If this doesn’t work, then you might need to install a package by ” apt-get install libaa-bin “. make sure you have super user permissions. The output should look like this: 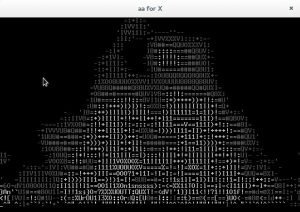 The upgraded version includes the audio visual treat in the output, it is complete text animation that draws and moves along with having a unique background.  Install the package by ” sudo apt-get install bb ” This is like so much amusing to watch. The output:

After selecting the options and hit 8 to continue, in the next screen you hear the musical talent of this command. As shown below. 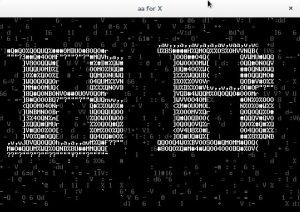 This is a command about a cow, it will present you a talking cow, and the cow will speak anything you want it to.  Install the package by ” sudo apt-get install cowsay ”  The output:

If you got bored with the cow, you can choose other animals just by l option, and choose from the list.

Here i have choosen the snowman, just followed by ” -f ” and the name of the animal from the list.

If you want to explore more features and customization of the cowsay command, i recommend you to check the man options.

As compared to previous one, this command can also make the cow to think, so, the things got interesting here.

you can also choose other characters and animals like we did in the previous command.

This banner command does some interesting art by printing banners like mentions and style text, but you have some limitations like, you can only print 10 characters at a time. At first, you need to install from apt, ” apt-get install sysvbanner ” The output:

The Matrix, remember the fancy animation of the Matrix, that represents something high-tech show off to feel as geek, well, here it is, this command draws the Neo Style Matrix on your terminal. Install it by ” sudo apt-get install cmatrix “. The output: 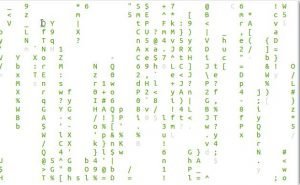 If you want to terminate the process of this command, use ctr + c

This is one of the cool Linux Tricks, it will continuously print the same text until it is manually stopped, it is like a indefinite loop, this command has no real use, but it comes handy in the situations like software testing where it required to produce large amounts of junk text.

The rev command is used to reverse the text, whatever you type it will give the output of reverse text.  The output should look like this: 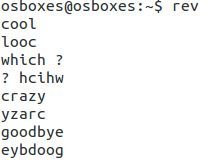 well, the name is so fun, i can feel that. This command is similar to banner as we saw before. I would like to meet the person who gave this name to the command. Install toilet by ” apt-get install toilet “. The output should look like this:

How long do you stay with your boring black/white pointer, where there is no animation happens and it still persists like a silly thing. I bet you wanna taste something new, then ” oneko ” is a package that includes the customization futures, for example, it will attach a jerry to your mouse pointer that moves along with your pointer. To install, ” apt-get install oneko “. The output should look like this: 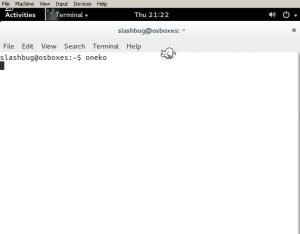 Let me tell you something, i can play you some good voices. don’t get it wrong guys, this command is multilingual software speech synthesizer, it can speak out the text from the stored sound files.  Just make sure your volume is high before running this command.  Use the apt to install ” sudo apt-get install espeak ” The output:

I think this is the most cooler command, it draws the pair of eyes on the desktop which move along with the cursor, just run the command ” xeyes “. The output should look like this: 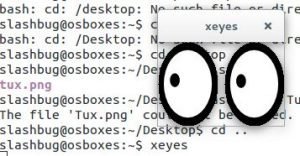 This Linux command will bring back the future from windows, something you might miss in the Linux, still not sure what it is? you actually know it, but you don’t feel to use it often, it is the Task manager, mostly in Linux there is no specific option by default for Task Manager. So, the command ” htop “‘ comes in handy. Just install it by ” sudo apt-get install htop “. After installed, run the command by ” htop “. The output should look like this: 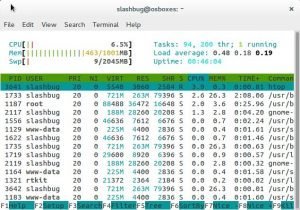 This is very handy and useful command, it is actually a neat File manager, which is easy and convenient to navigate through. Just get is from the apt package ” sudo apt-get install ranger “. After installed, just type ” ranger ” in the command line. The output should look like this: 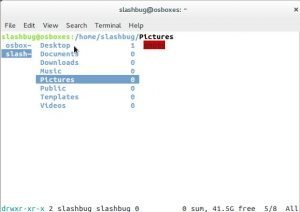 just use the up and down arrow keys to navigate through files and folder, and enter to select or open.

Go open a terminal and type this command, and be ready to answer the question. We don’t know reasone, but it’s fun, it’s one of the commonly known Easter Eggs in Linux. The output should look like this: 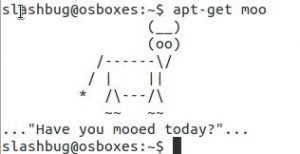 Spice up, color up, spruce them up, go in style in command line with colors. This command takes any text input and turns into rainbow colors by piping the text into lolcat. To use this, first install lolcat package by ” sudo apt-get install lolcat ” and then next install the fortune-mod package by ” sudo apt-get install fortune-mod “. Then you are good to go, just type ” fortune | lolcat “. and have fun. The output should look like this:

The Steam Locomotive in your Linux Terminal, isn’t one of the awesome Linux tricks. To make this possible, you need to install the package first. Use apt and install it by ” sudo apt-get install sl “.  After the install, type the command ” sl ” to run. If you want a smaller version of the locomotive then type “sl -l” for larger version type ” sl-h “. The output should look like this: 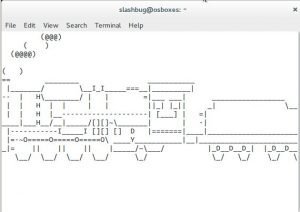 It’s time to wrap up, now you are genius to impress your friends or colleagues with this Funny Linux commands and Linux Command Tricks but i would like to give you some more bonus tips, that can be useful and handy for you to go through further in your Linux Command line journey.

Ctrl+E: Move the cursor to the end of the Line

Ctrl+A: Moves the cursor to the beginning of the line

Ctrl+K: cut the text after the cursor

Alt+F: Skips to the next space

Alt+B: Skips back to the previous space

Also check out my previous guide, on how to perform better and what to expect in an Interview to become a Linux System Administrator. 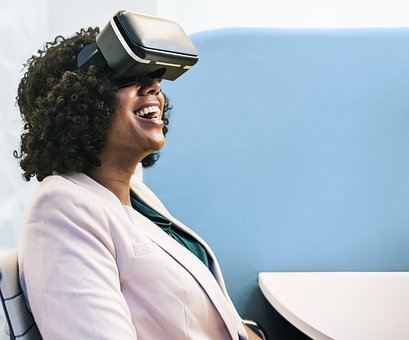 Looking for best VR headset of 2018? We have listed the latest VR headsets with their complete specifications. Here, you can also […] 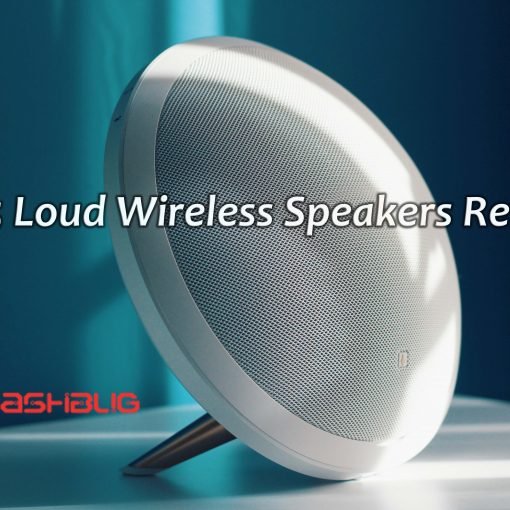 Are you searching for the best Loud Wireless speakers? If yes, then we can help you in your search. In today’s time, […] 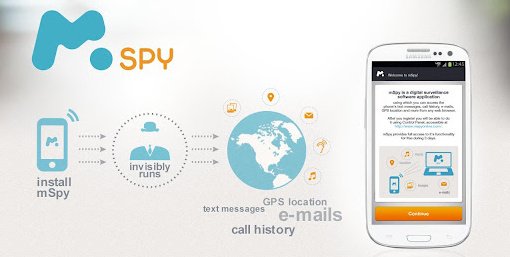 With the help of spy apps for android you can keep a check over the actions of your spouse, teen, partner, or […] 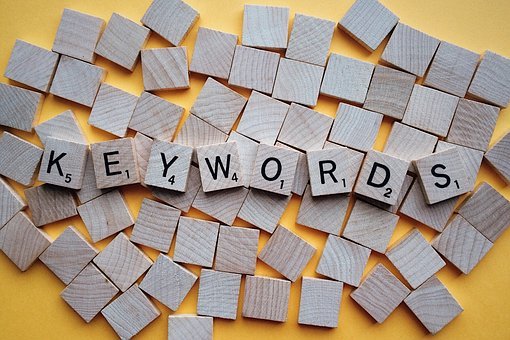 Appropriate long tail keywords are very important for any site to work well with SEO in this highly competitive market. One cannot neglect […]